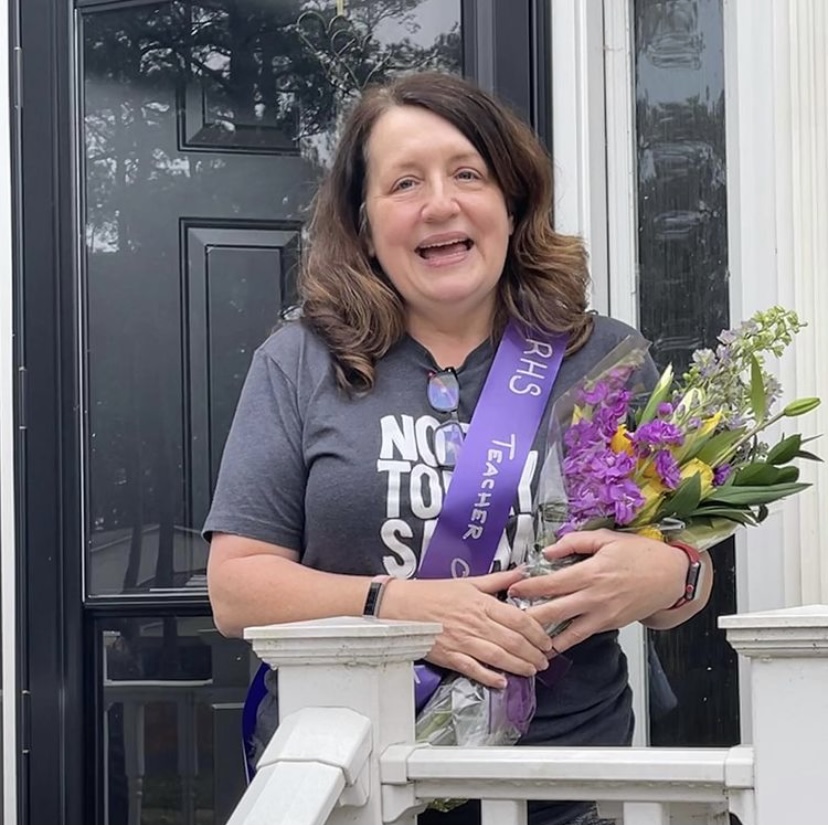 On the one day she wasn’t wearing a Riverside shirt, assistant principal Ashley Stephens showed up at her door with news.

Stephens and the rest of the Riverside admin surprised Foster by appearing in her front yard with flowers and a sash, and crowned her Riverside’s 2021 Teacher of the Year after a vote by Riverside’s teachers.

Foster grew up here in Durham, NC. Her inspiration to become a teacher was other teachers.

While Foster has plenty of great teachers during her own childhood, there were a few bad ones that inspired her to become  a great teacher for the next generation.

“I became a teacher because of certain teachers in my life that could have been better,” she said. “Also, my dad didn’t graduate high school because of a bad teacher.”

Shortly after  earning a BA in writing from Western Carolina, she decided to change paths and teach instead.

“One thing that always mattered to me was my education, so I wanted to share that with students of my own,” Foster said.

Foster’s students, both current and former, think she is a perfect choice for teacher of the year.

Edward Danforth, a junior, had her for AP English 3 last semester.

“Even online, I liked the energy she brought to the classroom,” he said. “She was always happy and the class was very engaging.”

While Foster has done her best to carry over her class to a virtual setting, it will never be the same.

“The thing that I hate the most is the cool personalities that I’ve missed out on,” she said. “My class thrives on interaction between me and my students, and we just don’t get that this year.”

Knowing how her class works best, Foster struggles with one of the most prevalent problems with online learning: lack of participation.

“We [as teachers] need an audience to play to,” she said.

Foster is grateful that some of her students are able and willing to keep their cameras on during online classes.

“Otherwise it’s like we’re just talking to ourselves,” she said. “And I hate talking to myself.”

Foster’s love for Riverside is obvious in every aspect of her life. Though she spent the first half of her career teaching at other schools, she has been involved with Riverside since its founding. Her husband, Steve Foster, has worked at Riverside for 30 years as a health/PE teacher, RPC coordinator and football coach. All three of Foster’s children – Beth, Stevie and Tina – will have graduated from Riverside by the end of the year.

She is also an avid reader and is a member of a book club made up of past and present teachers and staff at Riverside.

Foster will now go on to the DPS level teacher of the year competition, though she is more than happy with the school-level recognition.

“It means so much to me that my colleagues recognized me for this honor,” she said.

Opinion: Duke’s worst win in program history paints a grim picture of their season ahead. The Blue Devils’ poor shot selection this week doesn’t speak well for their chances of beating better opponents going forward. Read this Stein on Sports column on our website thepirateshook.com
Before coming to Riverside, Teresa Mugeni taught middle school in Wake County. She came to Riverside to experience something different.
The scene as Brazil went up 2-0 against Serbia with two goals from Richarlison. Photos by Tobias Rangel
Brazil goes up 2-0 against Serbia in the World Cup! Video by Tobias Rangel
Pictures from Brazil’s World Cup game vs Serbia. Stay tuned for more coverage… Photos by Tobias Rangel.
Thanksgiving is an American tradition, but at a school as diverse as Riverside the holiday is celebrated, or not celebrated, in many different ways. Our newsroom is a cross-section of our school community, and to each member of our staff a Thanksgiving meal is a window into our family’s culture. Read our staff’s Thanksgiving traditions on our website thepirateshook.com
My Tweets
×
%d bloggers like this: