After this year, Jeffrey Harris will be the only teacher that has been here since the school opened.

Harris has been teaching at Riverside for all of the 27 years it has been open. He and athletic director Margratha Chambers, who plans to retire in June, are the only remaining members of Riverside’s first staff.

Harris loves the school but there have been some challenging times.

“Back in the early 2000’s we had a rash of either students or faculty members passing,” he said. “In just a couple of years we lost a student in a car wreck, and two coaches, and that was just tough, the fact that just within our building we lost three people”

There are also some good times at the school that stand out in his memory.

“There was a also time when our science students were on national television” he said. “We had been asked by NASA and Duke university to help with some studies that were going on.’ 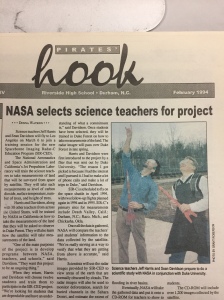 Harris has seen some changes in Riverside over the years.

“It’s a very different place,” he said. “It’s changed as much as Durham has, and Durham has changed so much since I was a kid. The changes that happen when a small town becomes a big town — I think Riverside reflects that.”

Harris has taught multiple classes and his favorite class to teach is meteorology. He teaches earth and environmental science, meteorology, geology, and astronomy

“Earth science is what I know best, because I’m actually interested in the material,” Harris said. “I’ really enjoy teaching meteorology.  I’ll be teaching it next year.”

Harris didn’t originally want to be a teacher.

“I enjoyed high school and it really wasn’t my intention to teach when I went into college,” he said. “That’s just where the courses I took in college led me, and there’s been no looking back.”

Harris was born and raised in Durham North Carolina. He loves to cook and travel around the country.

“I love to grill,” Harris said. “We like to travel and camp and travel around the United States.”

#TeachingThroughTheScreen
#TeachingThroughTheScreen
There are now 3 coronavirus vaccines authorized for emergency use by the FDA. Swipe to read more about each vaccine, including a Spanish translation.
#TeachingThroughTheScreen
Riverside gets vaccinated! Faculty and staff members are receiving their shots in preparation for the return to in-person school. To find out when you are eligible to get your vaccine, visit covid19.ncdhhs.gov/vaccines/find-your-spot-take-your-shot.
Estamos honrando graduado de la Riverside Omar Vargas-Delgado quien fallecio el 6 de Marzo. Desliza para detalles sobre su servicio memorial y visitacion.
My Tweets
×
Loading Comments...
Comment
×
%d bloggers like this: