Harker played her first year of tackle football for the Cobras in West Virginia in the seventh grade. When her family moved to Chapel Hill she joined the team as a freshman without much issue.

“I remember the first day of practice was normal,” Harker said. “No one really likes to say anything. Of course, [there were] looks and stuff, but they were all really sweet and supportive.”

Harker started as a free safety and helped the team win its season opener against Carrboro, 55-6. It was a well-deserved opportunity for a hard-working player, said her coach Isaac Marsh per

Unsurprisingly, her role on the varsity team has attracted significant media attention.

Football is traditionally considered a male-only sport in the United States. Harker is the most recent young woman to challenge that perception, joining a long history of women who played on men’s teams.

Luverne “Toad” Wise was the first. Wise was a female kicker for the Atmore Alabama High School Blue Devils in 1939 and 1940. She made history when she became the first female to score a touchdown in an American football game (not on the boys team), according to Alabamapioneers.com.

32 years later, Theresa Dion attended Immaculate High School in Key West, Florida. Also a placekicker, she was the first female to play on a boys varsity team in the United States, according to luckyshow.org

In the twentieth century, Holly Mangold, the younger sister of NFL offensive lineman Nick Mangold, followed his footsteps and also participated in high school football. Her main position was offensive line. Also a competitive weightlifter, she is more commonly known for winning a bronze medal as a member of the 2012 US Olympic Team.

In 2017, kicker Becca Longo became the first woman to earn a college football scholarship to an NCAA school at the Division-II level or higher when she signed a letter of intent with Adams State University.

The number of female athletes participating in male tackle football is steadily increasing. From 2014 to 2019 over 700 females participated in male sports in middle and high school sports in the United States, according to a report by Statista.com. 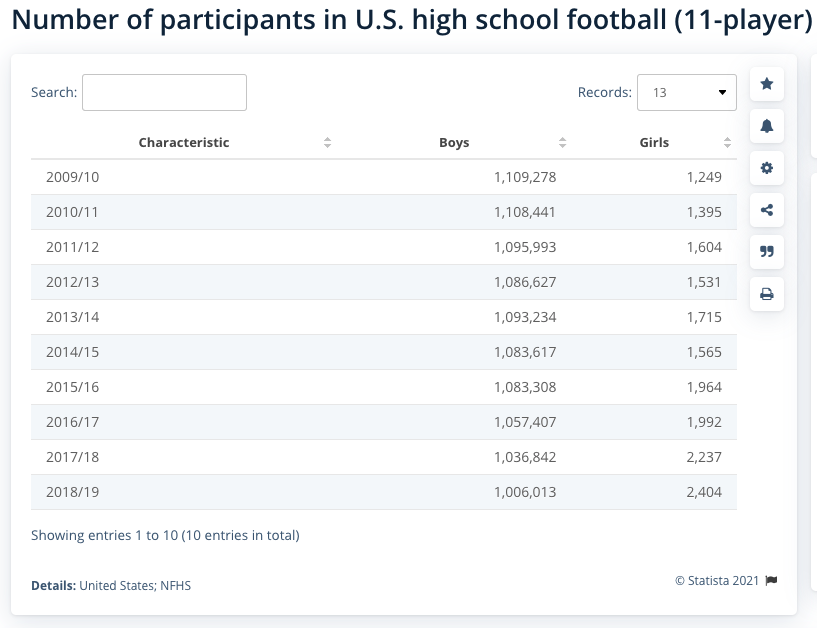 Despite a long history of women playing football, the number of female athletes playing at or above the high school level remains small. The sport remains male-dominated, with no women playing in the NFL and few on college teams.But high school girls playing on boys teams are gaining attention for their achievements. Kicker Sarah Fuller at Vanderbilt University made history when she became the first woman to play and score in a Power Five football contest.

“Girls’ participation in high school sports continues to grow not only in numbers but in the types of sports played. Between 1998 and 2018,” Tanaka writes. “The greatest increases were noted in ice hockey and wrestling, which had fewer than one percent female participation before 1998.”

At Riverside, Keilani Scanlon was the first female to play football in 2017. There have also been female students who competed on the wrestling team, says athletic director Robert Duncan.

“To my knowledge, we’ve had more than one female who has played [a male sport],” Duncan said, adding that he couldn’t name them for privacy reasons.

Duncan’s predecessor, Margratha Chambers, was at Riverside for more than 20 years. She said girls had as much an opportunity as boys to participate in sports.

“There shouldn’t be any barriers against females who want the same opportunity to play,” Chambers said. “I think soon it’ll become more common in the future for females [to play male sports] once they find out that it’s more impressive.”

According to the North Carolina High School Athletic Association (NCHSAA) all students, regardless of gender or gender identification, are allowed to participate in interscholastic athletics. The goal is for all students to be able to compete on a level playing field in a safe, competitive, and friendly environment that is free of discrimination.

Duncan went into detail that the current ruling is they must participate in the sport which they were assigned at birth,” said Duncan, “but there’s an appeal process that that person can go through to the High School Association, and that can be granted through them.”

“None of this should stop a young woman who wants to play football from participating,” said Harker.

Harker plans to keep playing for Chapel Hill High and thinks others should definitely try it.

”If more girls were willing to step out of their comfort zone, they would enjoy it,” she said.

She would advise female athletes interested in playing on an all-male team to work hard and listen to their coaches.

“Always be coachable,” she said. “And just always work 110 percent. Because of course, being a female, you have to work. You have to outwork everyone there. You know, just to be able to prove yourself .“

Celynd Malone currently teaches honors biology but has also taught honors anatomy and physiology.
This semester, Grace Farely is teaching honors biology. Originally from Colorado, this is Farely’s sixth year in Durham. She has been teaching for three years total, all of them at Riverside.
While he’s been teaching on and off at Riverside since 1995, this is Timothy Brown's first school year back from Kenya where he taught for the past four years.
Tavia Webley was born in South Carolina but has been living in Durham since 2000.
Shaun Thompson teaches Earth & Environmental Science, Biology, and AP Environmental Science. He also coaches the cross country and track & field teams.
Priscilla Graves is starting her second year at Riverside as the Career and Technical Education coordinator.
My Tweets
×
Loading Comments...
%d bloggers like this: